Garden Evolution - How my Hellstrip brought me Heaven

Over the last 5 or so years we began trials of different sustainability principles in various beds around the property. Reasons for this were many and varied, there wasn’t time to ‘properly’ prep and maintain beds, limited funds to put into massive bed renovation, and we didn’t want to use resources we didn’t have to (time, money, labour, water, soil, the plastic pots plants come in, fertilizers, on and on….). But mostly I wanted to flex an education I had worked hard to get and that I wasn’t afforded the opportunity to use as freely as I wished in my daily job.

This began in earnest when the city ‘upgraded’ the street in front of the property. The northwest corner of the property was widened and the sidewalk was replaced. This left the most hellish of hell strips, a chunk of space that was filled with sod rolled directly on top of the construction debris. In no time at all the chafer infested sod was peeled up and dying in clumps and chunks. Considering the space I didn’t know where to begin, or how to begin, but I did know what I wanted it to say. I wanted it to tell a story of hope for all gardeners and non gardeners that it is possible to have something beautiful without using vast amounts of resources. I wanted it to embody the captivating ability of nature to surprise and impact people. I wanted it to say don’t force it instead be patient, trust and be rewarded.

A huge inspiration hit me shortly after when my dear friend lent me Beth Chatto’s fantastic book, Drought Resistant Planting. I devoured this book, so much of it spoke to me at my stage in life, and at my personal goals both in horticulture and life in general.

We started with dry, rocky completely nutrient devoid soil surrounded by pavement in a space that scores of people walked by and on every day. I knew there would be foot traffic, bike traffic, dog urine, realtor signs, garbage, etc. The first step was to build a retaining wall to separate this space from the rest of the property. We repurposed chunks of concrete from an old parking pad in another part the property. The wall is dry stack and worked marvellously well, plus I’m really glad we could reuse the concrete. We have continued reusing and keeping materials on site and haven’t disposed of any landscaping material off the property since. Beth Chatto's miracle inspiration www.bethchatto.co.uk

Check out the blog on the gravel garden going 50+ days without rain!

We used the existing soil and plant material, which was one lonely buddjlea. The basic principle I stick to for this garden is ‘fend for yourself’. Anything that goes in gets no water, no fertilizer and no care, it either makes it or it doesn’t. It is a profound joy to sit back and watch how plants, and in the larger scheme garden ecosystems evolve for survival and reproduction. If you pay attention you will notice this can literally happen over a single season. Much of the plant material we started with was leftover roots and shoots from other projects, a tiny piece of Hypericum shrub, a few knarled stubs of Papaver roots (which I had always been taught hated to be moved and usually didn’t make it, well the proof is in the pudding my friends), some Echinacea purpurea ‘Green Jewel’ tufts, a couple chunks of fall flowering blue Aster, a teeny transplant of Echinops ritro, and two small Limonium perezii. I used Beth Chattos method of submerging the plants (or plant parts) in a bucket of water before planting. Fast forward three or so years and every single plant I put in the first year is still there, some have spread far more than I thought possible (Papaver, Aster, Echinops) and some remain relatively the same size and maybe send out a flower or two annually (Sea Lavendar, Echinacea).

The following year we seeded in early March, wanting to catch as much of the rainy season as we could because we knew it was the only water the garden would get. And while I cant remember every seed and scrap that was put in in subsequent years I do have some highlights. Bronze fennel and Verbena paraguayensis were added by taking seedlings from another garden. Both of these plants are highly prolific self seeders so both are a blessing and curse, depending on your location and outlook. These two plants were essential in the first years of the garden both in breaking up compaction and adding nutrition. Two to three times a year I would move through the garden and pull up the majority of the seedlings to leave on the soil surface to decompose.

The seed bank in this garden was initially low so we got lucky on that one. Annual weeds like snapweed and chickweed were pulled and left on the soil if the day was hot and they didn’t have seedheads. This garden did contain (and still does) one heck of a predalition for perennial weeds (dandelion, buttercup, plantain lily). This turned out to be an assest. We would let the weed get to a modest size and before flowering started rogue it out and let it decompose on the soil surface. Again reaping the benefits of breaking up compaction (plaintain lily and buttercup are especially good at this), and getting all those nutrients back into soil to be recycled. 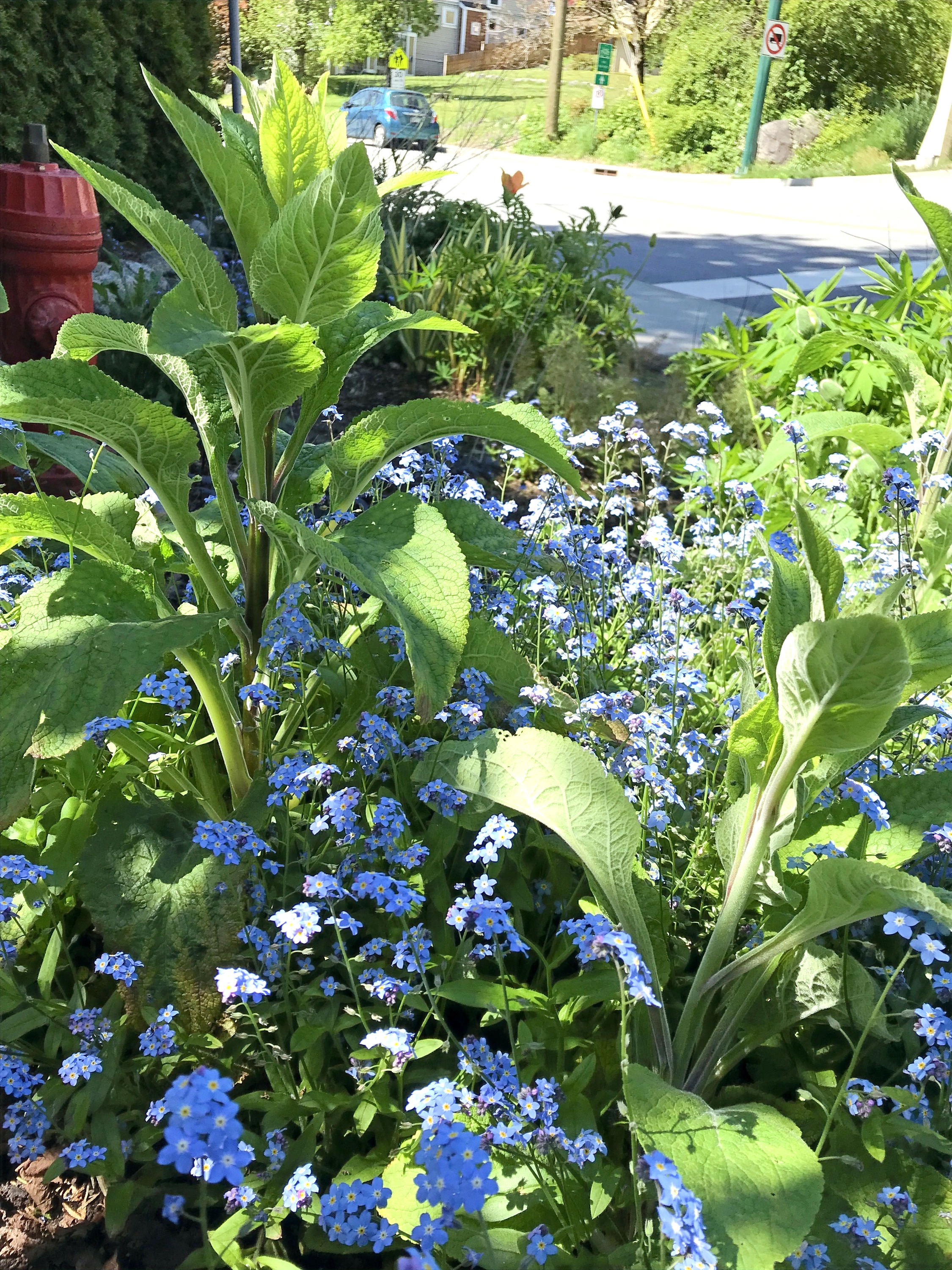 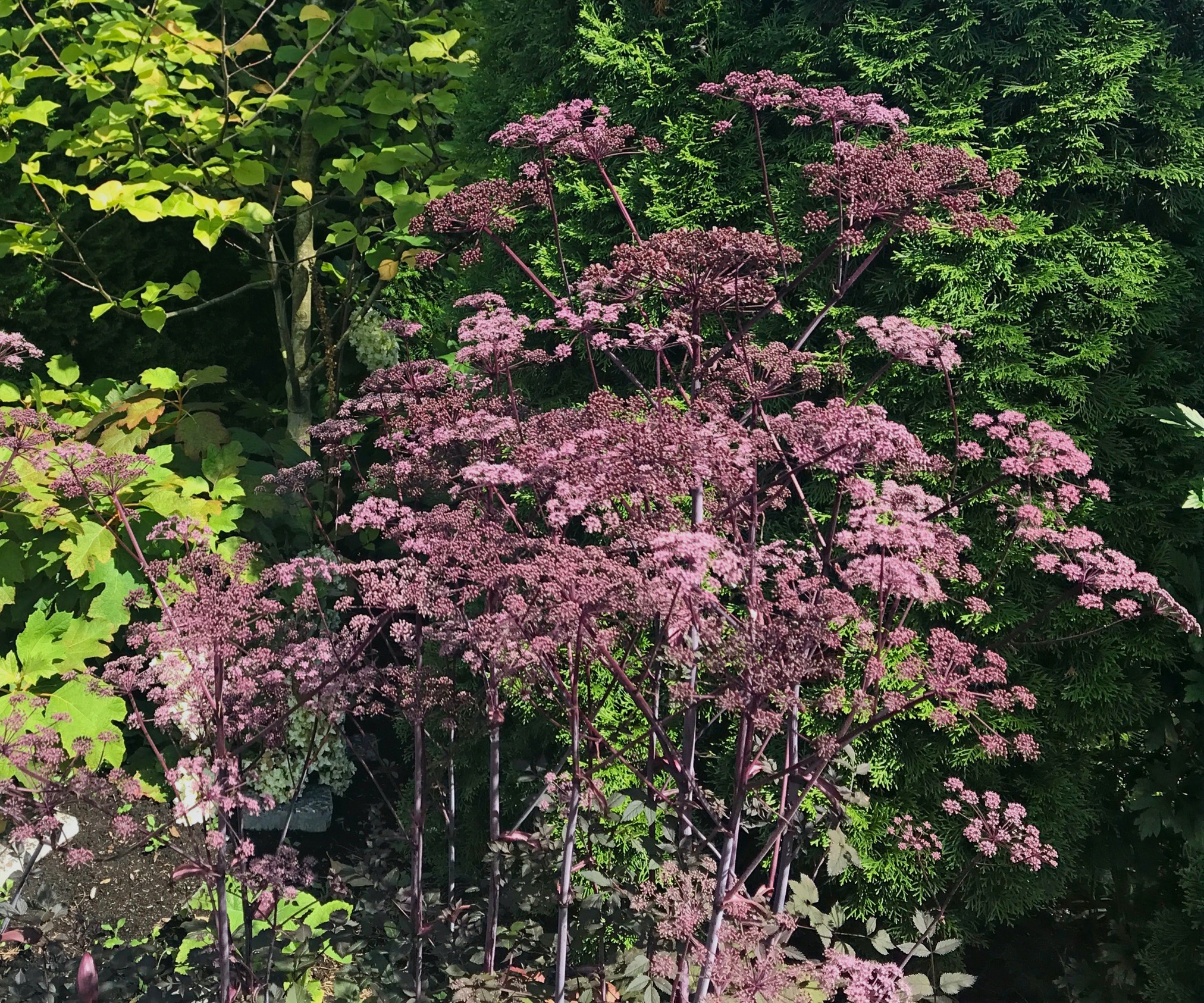 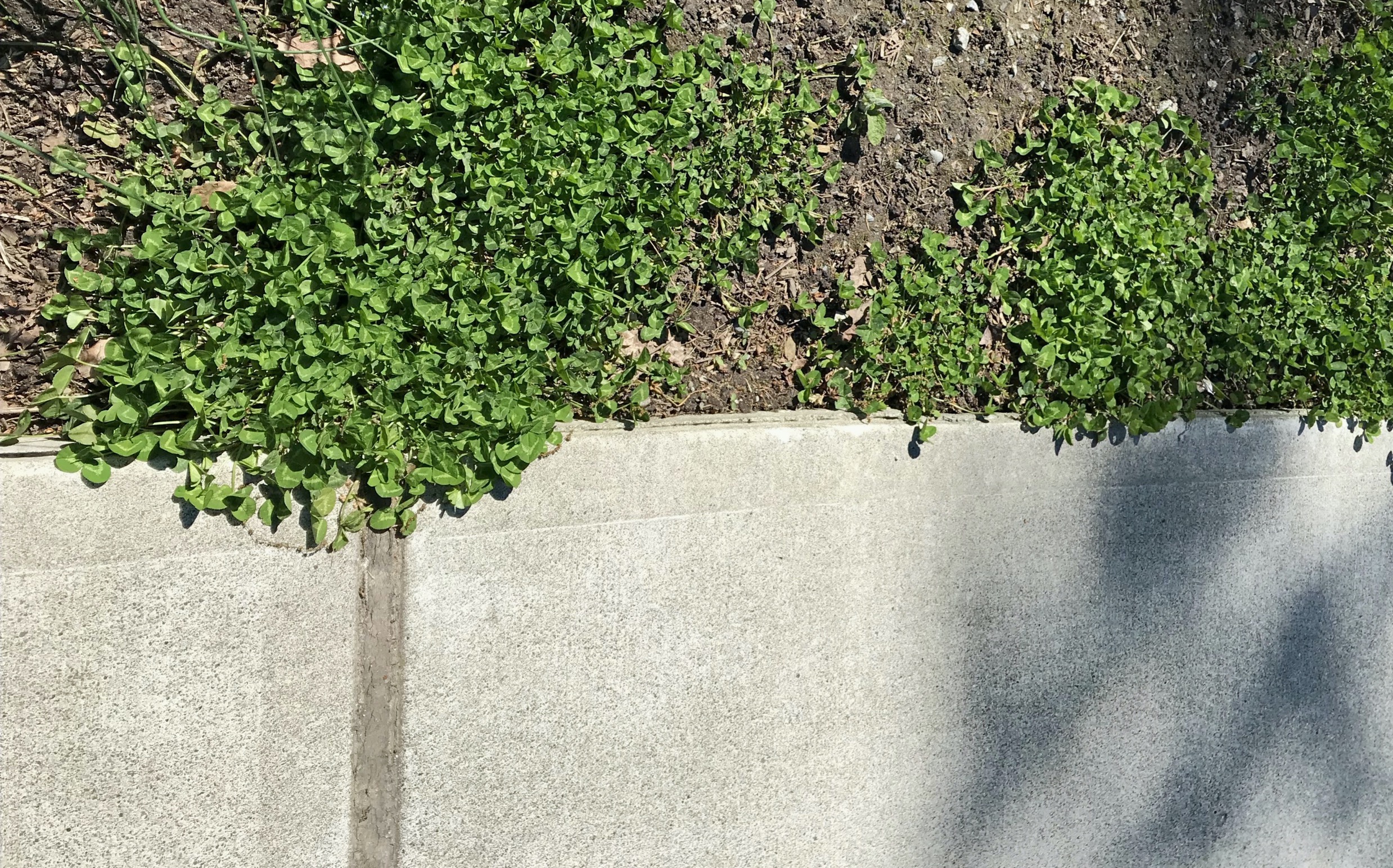 One of my favourite successful seedings was the crimson clover put in at the edge where the garden meets the sidewalk. Clover has loads of benefits not limited to breaking up compaction and adding nitrogen to the soil with its root nodules. It spreads well, and flowers a beautiful crimson every spring. We added tiny allium bulbs that were destined for the compost bin, as well as baby Columbine seedlings. Digitalis and Myosotis where added by pulling the plants from another garden and leaving them to dry and shed the seeds on the soil surface. Last year we added seedlings of Angelica and baby Ohiopogon. Ratibida, lupine, purple tansy and thai silk milkmaid were seeded, and I was surprised to see only the lupine and purple tansy were successful. I am pleasantly surprised at how well these plants have organized themselves, a lot of these choices would run rampant and out of control in most traditional maintained gardens but because of the low nutrition, high compaction and extended drought periods everything stays in harmonic balance. Each finds a suitable niche and utilizes it.

A grove teaming with masses of Digitalis and Myosotis

We do have our share of pest and disease issues as well. Including a major outbreak last year of black aphid on the lupines directly after flowering. I left the plants as is and waited patiently for ladybird larvae to show up and do their magic. A few weeks went by and the outbreak was extensive, the ground surrounding each plant was covered with black aphids and they had moved on to the echinops. So, opposed to waiting any longer I cut all the lupine and echinops to the ground and scooped up what I could of the aphid bodies littered around. This is a very successful method of eradication with perennials, you remove the entire food source and insect population at once and wait for the plant to grow back the following year. I have also had success with juvenile trees by stripping off all the leaves (provided your pest is on the leaves alone), although timing is important on this one.

This garden is beyond what I could have imagined. It has been far easier and less time consuming than I had anticipated, and infinently more rewarding than others. It is so freeing knowing I don’t need to check on it, and there isn’t the sense of struggle so prevalent with other gardening methods. I am not holding my breath waiting to see if its successful, because whatever happens, and whatever plant holds centre stage and however they work together, by allowing the garden to be what it wants to be it will always be successful.

Bringing Structure into the Garden with Architectural Plants

Deadheading for Pollinators: Prolonging the Bloom

The Magic of Seedheads in the Garden